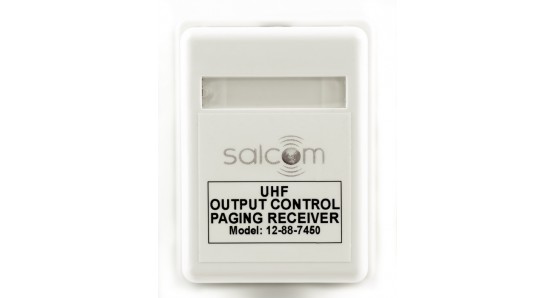 By default the 12-88-7000 is configured to use an internal PCB aerial, but an indoor external aerial (SMA) can be used if required.

If the application requires an outdoor external aerial, the Salcom 12-84-7000 is a more suitable receiver.

The 12-88 is a cost effective remote switching solution which is simple to install and can be configured using any serial terminal program.

A 12-48 USB or 12-47 serial programming adaptor is required to configure any unit parameters.

To control the outputs a message must be received that matches the unit ID with a suitable control code sequence (Salcom relay control protocol). The received message must also be the expected baud rate and format. The 12-88 will also respond to a group unit ID of “00”.

A mono-shot timer can be set to between 0.1 seconds to 6553 seconds for each output allowing the output to open automatically after being closed.

Setting any output mono-shot timer to 0000 results in the output remaining latched until a message is received to change its current state.

If configured to do so, each output state will be stored and restored to the last set state on power up.

The 12-88 can be configured to respond to up to 4 different CapCodes (RICs).

Decoded messages are also sent to the programming connector (serial port). These contain the message payload only, making the output suitable for remote serial control applications.